After spending more or less a year in its Early Access phase, we've decided that Cosmonator is ready for full release! We're really excited to have finally rolled out the 'final' product (although we absolutely intend to add some extra additional content in the future, and will be keeping a close eye on any feedback that requires fixes or updates - fingers crossed not too much of that is necessary).  We've also updated our free playable demo here on itch.io so that it is in line with the latest (full release) version of the game, although obviously much of the demo's content is locked.  Feel free to download and play the demo, and as always - even though we're now done with Early Access - we are still open to any feedback!

Looking back, it's weird to think that we were in two minds about going into Early Access in the first place. (We almost went straight into full release, right off the bat). Honestly, the time in Early Access, and especially the incredibly detailed and constructive feedback we were lucky enough to get from a handful of awesome Early Access users, has proven to be absolutely crucial in shaping the game into its current polished form. It turns out that there were countless blind-spots that neither of us (two devs) were able to see, and that became painfully obvious to us once pointed out by random players with fresh perspectives. Here's a retrospective look at some of the most important changes and improvements we've made during this time, as suggested to us by our Early Access users! 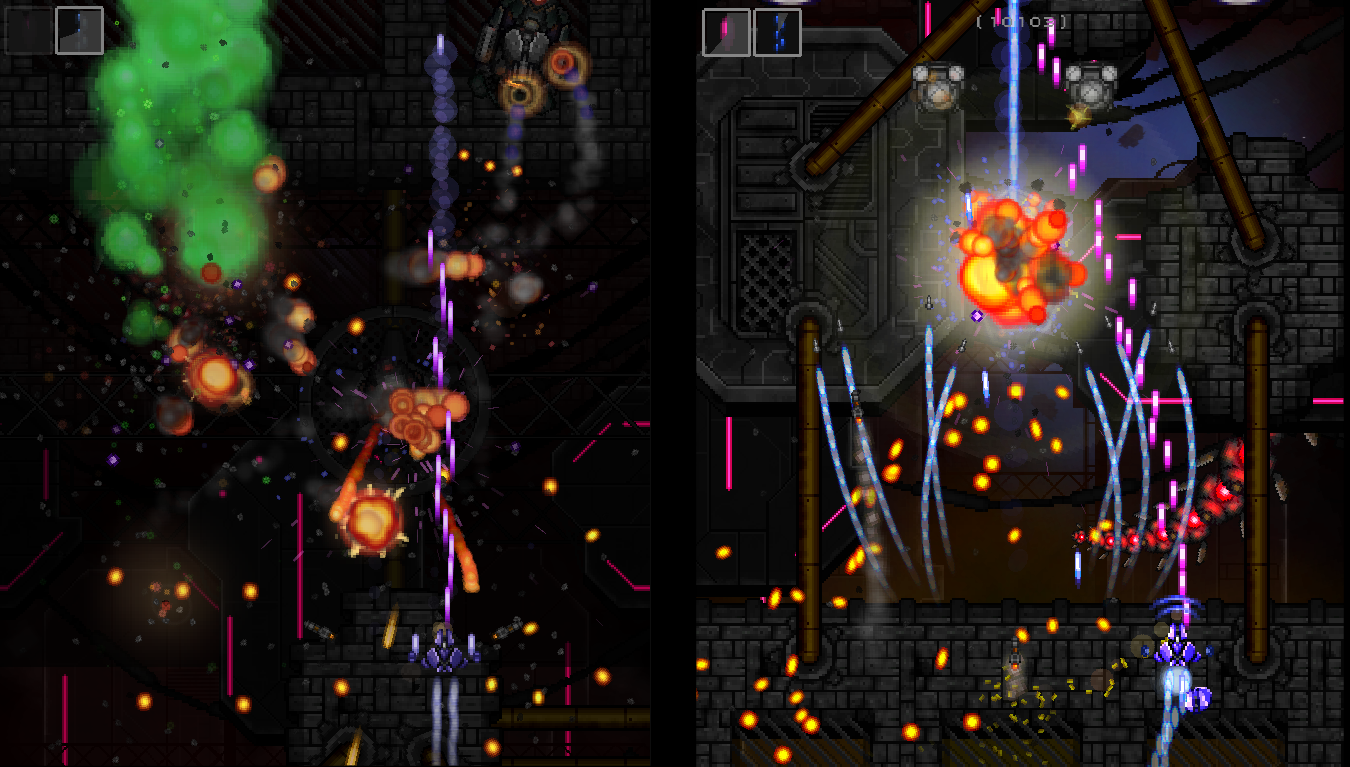 (Before / After brightness increase)

The very first criticism we received back when we started out on Early Access was that the game itself and especially the backgrounds lacked vibrance; everything was a little dull. This was totally true. We've since greatly improved the overall brightness and richness of colour of all the game's graphical assets, and we've also worked on a ton of more interesting backgrounds for many of the individual levels, and also added a number of colourful space entities (planets, nebulae, etc) to the levels that are still set in the darkness of space. The only challenge in this process was to ensure that the new vibrant backgrounds didn't become TOO striking, so it's still possible to discern the actual action of the game (bullets, explosions, etc) without things getting too confusing. At this point I think we've hit the right balance. Hopefully.

The margins (left and right of the vertically-scrolling in-game action) of Cosmonator have always felt a little bare, and since the beginning we've considered addressing this, but it wasn't until enough of our players prompted us that we actually decided to do something about it. 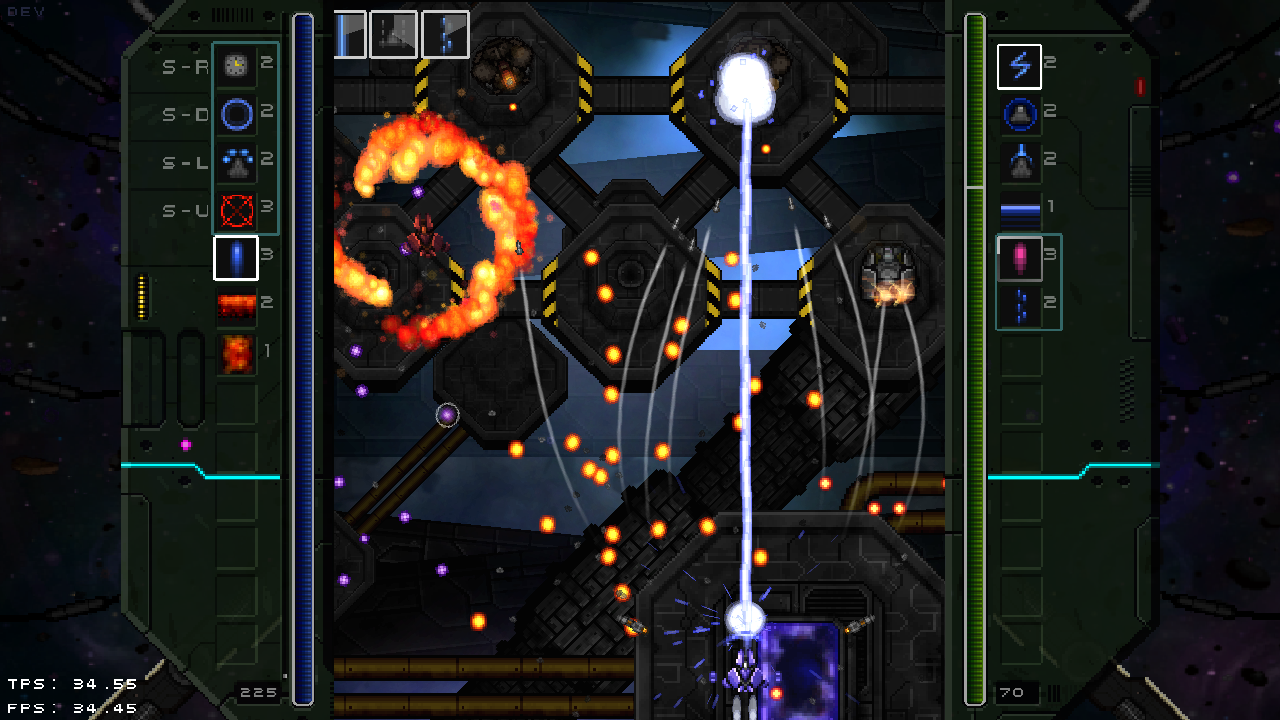 Here is an example of one of our new dashboard options (you can choose your preferred dashboard style in the game's settings). It's all purely decorative, but it does make a difference. (The original black margin dashboard is still available, in case players want a minimalist experience.)

This has been an ongoing quest for us - since Cosmonator starts you out weak and then slooowly builds you up to become more and more powerful, we really wanted to reward players with a solid sense of destruction when they finally reach the point where enemies crumble under the upgraded firepower and devastating offensive spells that you acquire as you progress. 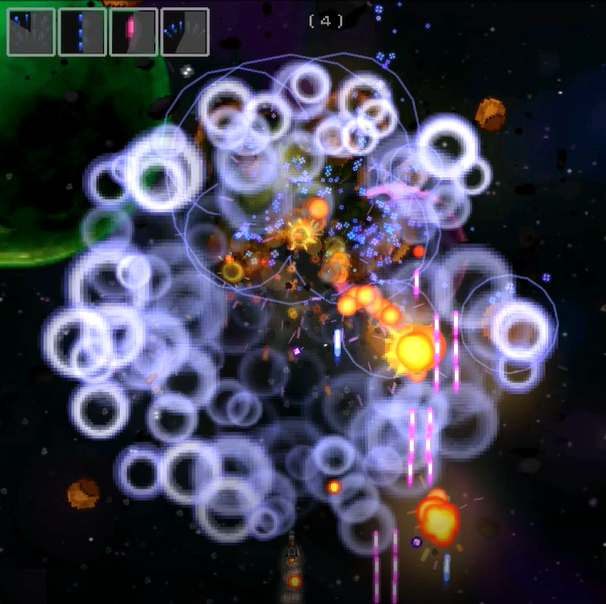 This is something that many of our users pointed out, and that even earned us a couple of negative Early Access reviews, so we took this feedback very seriously. The 'adapted reward curve' system of Cosmonator, which works more or less like a really weird XP / leveling system, if you're thinking in terms of traditional RPGs, is essential to the game's progression mechanics. But back at the beginning of Early Access, it was WAY too punishing, and made for a grindy, hardcore playing experience that was experienced as negative by most players. (When designing the game originally, we were pretty cocky about this kind of thing: we didn't really care what people thought, but then again we didn't really plan on landing on Steam and having to consider what players actually wanted, so that was a nice lesson for us.) We've since taken a lot of time to do several rewrites of the character progression / reward handicap system, making it much less grindy, much less punishing, and really opening up the positive flow of the game. So, ironically, thanks to a couple of bad reviews, the game has seen a major improvement. Thanks guys! :/

The same players who were complaining - legitimately - about the game being too grindy, were also saying they wanted some kind of a selling or respec system, so they could try out different upgrades and spells without having to commit so fatally to their choice every time. This presented us with a dilemma: it's a fair request, but it was still really important to us to keep a sense of players choosing a 'path' or specific character build within the game's sandbox environment, so simply being able to respec or sell and buy at will would not work. (Consider most traditional RPGs - the choices you make when leveling up, typically are permanent, with one or two mitigated exceptions.) So, we implemented a compromise which we believe fits perfectly: you have a limited sell allowance that increases as you improve in the game, so you can sell a few things if you really don't like them, but you can't just go crazy and do whatever you want. It's weird, but I think it works really well. We are still waiting to hear more feedback to see if this actually keeps everyone happy. Here's hoping.

To be honest, the number of enemies and different bullet patterns a year ago were already quite varied, but some of our Early Access players wanted more.  We've since implemented some more funky looking attacks, for instance the Adjudicator's pink helix bullet pattern (above center) and Solar Axis' multi laser attacks (top right), both of which will force you to use different defensive tactics in different situations.

I can't believe we tried not doing this. I was very stubborn about it, because I was scared it would mess up the flow of the game. I'm so happy I relented to the pressure of the various users who insisted playing a level for the first time will be more fun if you immediately have the chance to get an extra reward if you clock the level with 75% life remaining. This way, even levels that are otherwise boring or too easy become fun, because you can immediately try for that bonus, without having to come back and grind later. So obvious.

Well, this is something we were always going to do. It was just a matter of time. Most importantly, the Drone shop now has a number of additional advanced upgrades that make owning a drone more interesting - for instance, you can now use a drone for all kinds of support functions in strategic ways instead of just for pure firepower. You can even remove the Drone's gun altogether and replace it with a tactical Repair Unit or an Energy Cell that helps you to recharge energy for spellcasting.

Since we've made it possible for players to get an extra few gems via the gauntlet mode and via a few newly added side missions, we also added a few additional interesting feats (which cost gems) to spice things up. A few of the more interesting new feats are Energy Snatch, which allows you to grab extra energy by phasing through the remains of defeated enemies; Conservation, which allows you to conserve the duration of support spells when not directly using the weapons affected by those spells; and Phase Barge, which allows you to do heavy but risky damage against enemies if you phase straight into them.

Finally, we've showcased all these changes in a snazzy gameplay video, which is now also our main trailer for the game. Check it out!

(Here are links to Cosmonator's Steam page and to our IndieDB page if anyone is interested in finding out more about the full game - but like I mentioned, feel free to check out the included free demo here on itch!)